Not Sure What Business to Start? Go For the Pet Industry!

While there are many reasons why some businesses succeed and others do not, one of the most important factors is choosing the right industry at the right point in time. One of the industries that many investors are currently betting on is the pet industry, and here are six reasons why.

A while ago, I asked Alexis Perakis-Valat, former CEO of L’Oréal Germany and now part of the global management committee, why he chose the cosmetics industry. He said that while there were many reasons, one of the most important things to him was to choose an industry that is recession-proof.

Ever since then, I have analyzed certain industries in which to open my businesses to see just how recession proof they are. The pet industry seems to defy all odds during recessions and has been very little affected by economic crisis so far.

Here is an excerpt of Google Trends for the search terms “dog toys” and “cat toys”: 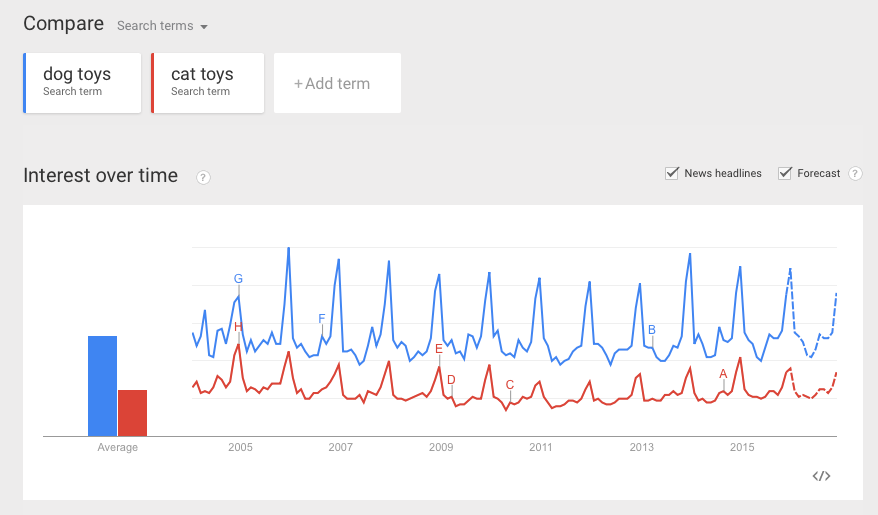 As seen above, the demand seems to be steady — and the demand for puppies even increased: 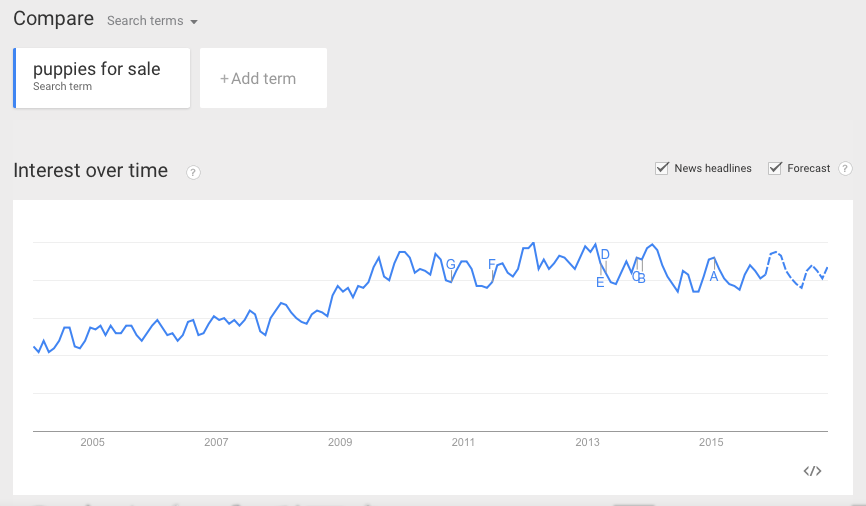 The nightmare of every entrepreneur and investor is to have a seasonal business. Seasonal demand limits the cash-flow to a couple of weeks per year, which means you need to stack up on inventory based on an estimate of future demand. Needless to say, that this is not ideal. However, there is a difference between a seasonal product and a relatively well-predictable demand that has seasonal peaks.

Predictability is worth more than high demand during Halloween (e.g. for a costume shop) or Christmas (e.g. for a Christmas tree manufacturer), because it reduces the risk of having too much inventory and allows for long-term planning. As seen on the Google Trends traffic, the pet industry peaks in December but maintains a steady level of base demand throughout the year.

3. There is no need to educate the customer.

If you are a fan of Shark Tank or Dragon’s Den, you know that some of the most innovative products and services do not get funding. The reason is that the biggest expense would be to educate the customer on what the product does and why it is so important.

The vast majority of new pet products need no explanation whatsoever. Pet owners already know that health, training and the entertainment of their furry family members is important and are happy to give new products a shot in the hope that it will benefit their pets.

4. The industry benefits from the Kinderschema.

Ethologist and biologist Konrad Lorenz studied what set of traits makes things appear cute to us. This set of traits is now known as the so-called Kinderschema which describes the head-to-body ratio, the position of the eyes (below the midline of the head), and size of the eyes relative to the size of the head and more. The idea behind the Kinderschema is that we are hardwired to find things cute whether we want it or not.

One of the reasons products for children and pets are attractive to many entrepreneurs and investors is that these industries benefit enormously from the Kinderschema. We are attracted by puppies, kittens or any young animal for that matter because they have the perfect Kinderschema. Big eyes, a large head, the right head to body ratio and other traits that our subconscious perceives as adorable.

For retail businesses, you are looking to have an average margin anywhere north of 60 percent. While dog and cat food margins are mostly around fifty percent, the most popular items such as chew toys and bones have 70 percent margins. Food for pets accounts for slightly more than a third of the entire market, with 23.04 billion spent in pet food annually. Designer collars, luxury clothes, and other high-end accessories for dogs also have great margins, which helps to keep the average margin high.

The pet industry is not only attractive for retailers but also for service businesses. There was a steep increase in demand over the recent years as the number of pets has grown to 312.1 million. Since 1994, the market has more than tripled in size and grown from 17 billion to over 60 billion in 2015 in the U.S. alone. This means that not only are there more pets who need to be fed, walked, entertained, groomed and boarded, but pet owners continue to spend money on them as well.

Dog owners spend an average of around $1,641 and cat owners approximately $1,125 per year. Less than two-thirds of the costs are spent on vet visits, leaving the remaining two-thirds up to retailers and service businesses.

–
This article was first published on Entrepreneur.com